Neruda to be Exhumed: Murdered by Pinochet or Coincidental Heart Attack? 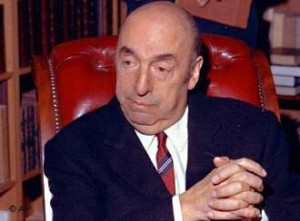 I just read an article in Aljazeera that explains that the Chilean Nobel laureate will be exhumed so that forensic investigations can be done to confirm whether or not Neruda was poisoned by agents of Pinochet just days after the military coup that ended the presidency of Salvador Allende and initiated a 16 year dictatorship or if he died of a heart attack as is the current «historia oficial.» Neruda’s driver claimed that he was poisoned and the exhumation should shed light onto the matter.

It is not surprising to think that a dictatorship would see a poet as an enemy. Neruda was nominated as a presidential candidate in 1970 which would make him an obvious target for Pinochet’s regime.

Soon we may see how modern forensic science might change literary and political history.