UT’s Center for Mexican American Studies: From Paredes to Present

This fall, I’ve been fortunate enough to work as graduate research assistant for the Center of Mexican-American Studies (CMAS) under its new director, John Morán González. Now in its 46th year of existence at the University of Texas at Austin, my research focus this semester has been uncovering the center’s origins, most of which can be found within the letters, memorandums, and faculty meeting minutes in the Américo Paredes Papers at the Nettie Lee Benson Latin American Archives. While we absolutely take for granted the fact we have had a vibrant Mexican-American studies focus and research center here at Texas for almost 50 years, its inception and early history were not without particular frustrations and controversies–mostly dealing with feelings of tokenism, the battle against “ethnic studies,” and the unyielding desire of center faculty for an academic degree program in Mexican-American studies at both the undergraduate and graduate levels.

CMAS was born in the fall of 1970, thanks to the efforts of the Mexican-American Youth Organization group at UT, and the faculty support of figures such as Américo Paredes, George Sanchez, and Stanley Ross. Paredes was made the center’s first director, and he explains his vision for CMAS in his writings, saying:

«…when a program brings together materials and methods from different disciplines and focuses them on one specific ethnic group [then]…this approach, to my mind, justifies its reason for existence because of its fresh viewpoints into education, and because it can organize new knowledge that may be brought on minority problems within our society…My position has been that, if such programs are to be created, they should be genuine and meaningful, not exercises in public relations, with the sole object of bettering the University’s image. (Paredes Resignation Letter, 1-2).» 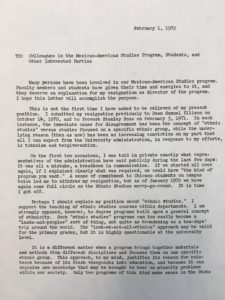 From Paredes’ explanation, we can recognize that the center’s mission was to be an interdisciplinary program that focused specifically on Mexican-Americans in order to bring fresh viewpoints into education and organize new knowledge that could help relieve problems minorities face in society. In order to successfully achieve this, the center would need Mexican-American Studies to be not only an academic major, but also to obtain a graduate program. Furthermore, this work had to be genuine and meaningful and was to function independent of the university’s “public relations” priorities.

However, the university’s vision of CMAS was quite different. The university’s design for the center was to be in charge of a concentration of Mexican American Studies under the umbrella of the Ethnic Studies Department. Paredes would eventually go on to resign as director of CMAS in 1972, and the university responded by explaining that their intentions for CMAS were clear from the beginning:

«Since there has been a great deal of unnecessary confusion about the undergraduate degree program (B.A. in Ethnic Studies) with a concentration in Mexican-American Studies, a short review of its history and assurance of its existence is appropriate. The B.A. in Ethnic Studies (with planned concentrations in specific ethnic areas) resulted from considerable faculty discussion and approval, and positive administration action on campus by the UT System and the Board of Regents and the Coordination Board. It was felt at the time that Ethnic Studies would provide flexible and protective umbrella under which concentrations in variety of ethnic fields could develop and flourish and their common denominators be explored in serious, academic spirit. This is the program which was in existence when Dr. Paredes became Director of the Mexican American Studies Center with the assigned responsibility to develop the Mexican American concentration within the approved degree program (President’s Response, 2).» 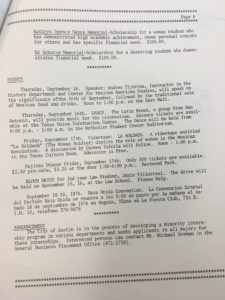 Paredes took this as a serious offense and an example of “tokenism and tergiversation.” However, in spite of the difficulties, CMAS continually succeeded in producing research, publications, student support, and community outreach. Reading through the CMAS newsletters, I found that the center held numerous events outside of classes. These included lectures (one of the most publicized being Raza Unida Party leader, José Angel), movie showings, blood drives, dances, and “Fajita Dinner Friday.” Graduate student at the time (and CMAS’s first GRA), José Límon would personally go out and fund-raise in order to allow CMAS to give back to its students and its community. The center was also extremely proud of its “Chicano Reading Room,” which they wished to expand into a “Mexican-American Studies Library” so students and community members could easily access Mexican-American writings. Paredes also established a “Texas Concilio for Chicano Studies” through the center, and the center was also involved in creating or supporting various symposiums at the university on the topic of Chicano Studies, along with the “Mexican American Studies Institute.” Although it would be a while before CMAS achieved the degree program it deserved, this did not discourage its students and faculty from tangibly affecting change for Mexican-Americans. 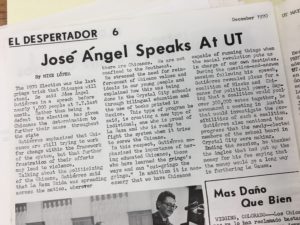 While not without its own tough history, CMAS has thrived for almost fifty years, still hosting lectures, still producing research, and still serving lots of food. Just the other day, I was fortunate enough to attend the center’s Jovita González Memorial Lecture, and I was met with a room of people passionate about Mexican-American and Latina/o research. No matter the circumstances or controversies, CMAS continues to this day to prioritize not only academic research, but touching the UT community and Austin at large.

Quotes taken from «Paredes’ Resignation Letter» and «The President’s Response» in the Américo Paredes Papers at the LLILAS Benson Collection.

All photos from the Paredes Papers at the LLILAS Benson Collection 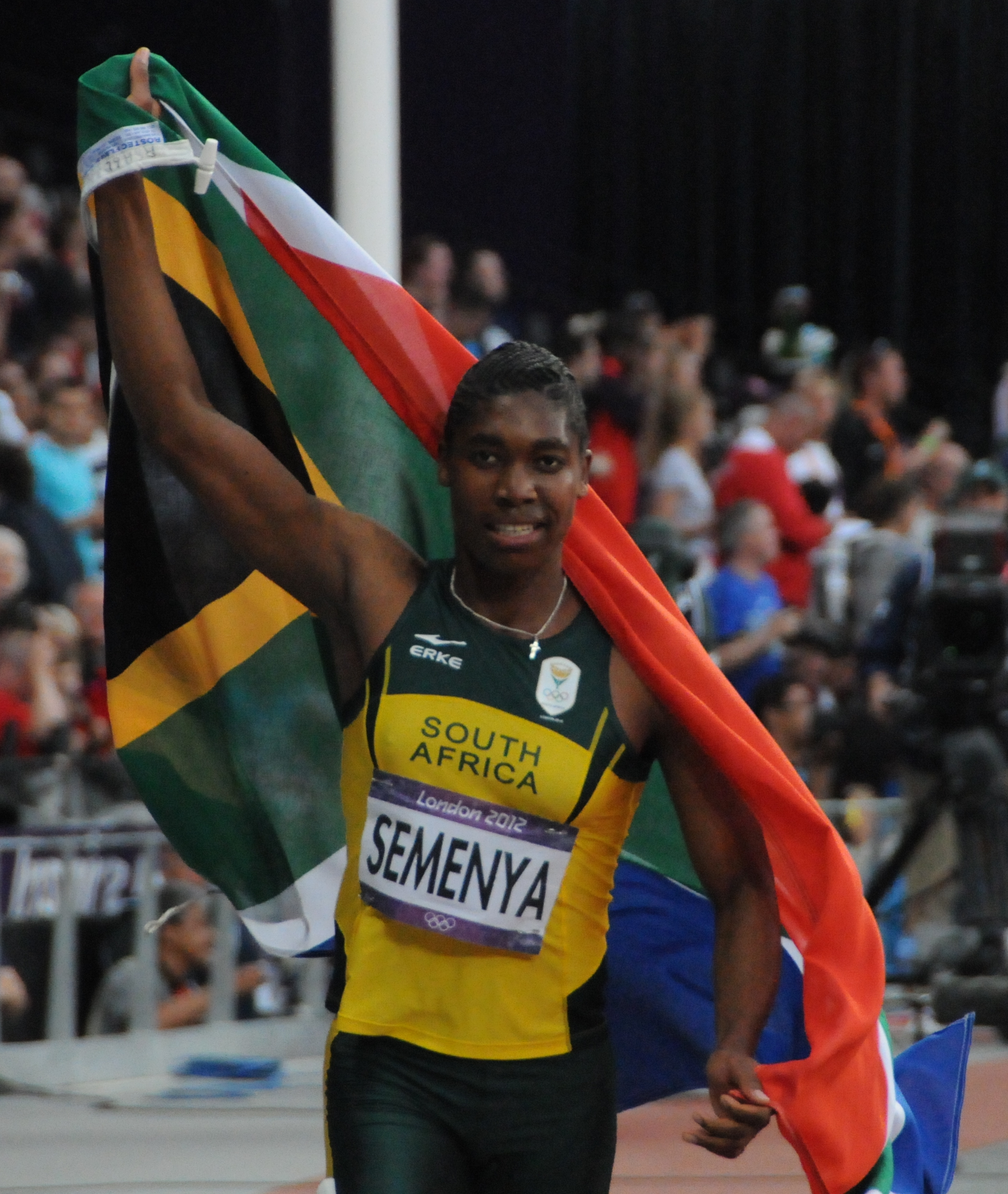 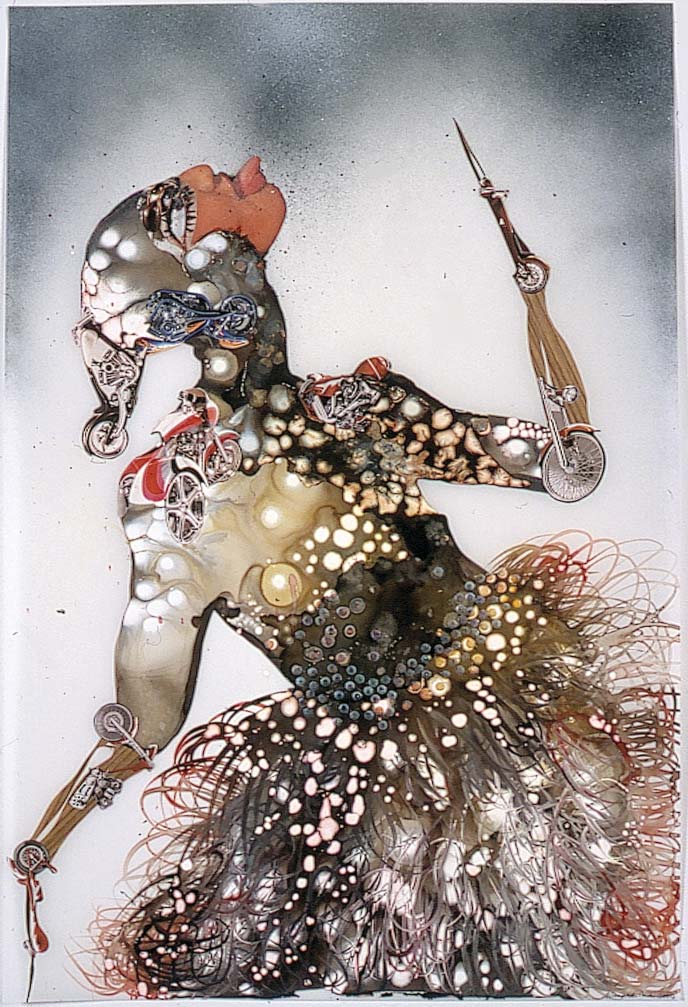